Ask Don Moen what he does, and the answer might surprise you. He won’t say he’s a songwriter even though he’s written more than 100 songs. He won’t say he’s a worship leader even though he’s led worship on every continent but Antarctica and recorded numerous albums. He won’t say he’s a businessman or producer even though he has produced and directed hundreds of successful projects. If you ask Don Moen why God put him on this planet, he’ll tell you, “To be an architect who designs products and events that help people experience God’s presence in a new and fresh way.” And in more than three decades of ministry, he’s had lots of opportunity to fulfill that purpose. His discography reflects his passion to create resources for the church that lead people into an honest and intimate relationship with the Lord. In 2002, his peers recognized that lifelong commitment and presented him with the Ray DeVries Church Ministry Award.

Don has also received a Dove Award for his work on the musical “God With Us” and has received multiple Dove Award nominations for his songs, CDs and choral resources. In addition to his writing and recording, Don makes time to tour domestically and abroad and has performed with artists such as Chris Tomlin, Twila Paris, Sara Groves and Paul Baloche to name a few. He also has served as worship leader for past National Day of Prayer events and as a music industry spokesperson, having been featured on Fox News, NPR and in USA Today. 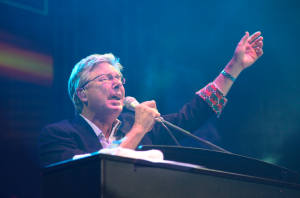 Don is as popular overseas as he is at home in the U.S. His travels for concerts and seminars have taken him to Ghana, South Africa, Singapore, the Philippines, South Korea, Brazil, Canada, Australia, Great Britain, Hong Kong, Malaysia, Indonesia, Japan, Guatemala, Honduras, and elsewhere. Today, Don is President of Don Moen Productions in Nashville, Tennessee, where he resides with his wife Laura and five children.